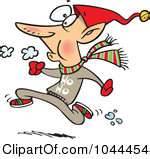 So, apparently, Colby has been too busy eating Cookie Butter to post a recap of the race we ran on Sunday. I’ve been busy as well. First, I had to hunt down a local Trader Joe’s that hadn’t been “raided” and still had the damn Cookie Butter in stock. Then, once the goods were successfully procured, I had to dig immediately into the Cookie Butter in the car while I ran errands for an hour or so. And what a fabulous hour of bliss it was. Only after arriving home from my errands did I notice that my mouth felt a little funny and decided to check the ingredients. BINGO: soy flour. I have an anaphylactic allergy to soy. It all made sense – the swollen roof of my mouth, tingling tongue, scratchy voice. Damn Cookie Butter. Since I couldn’t find my epi-pen and my kids were due off the bus any minute, I popped some Benadryl and hoped for the best. Fortunately, the reaction was mild (I guess I didn’t eat that much), my kids had a nice evening with an extremely spacey but kind mommy, and I’m still here. The kicker is that I still wanted the Cookie Butter even after the reaction! I picked it up a few times and took a big whiff. Pure deliciousness. I considered taking a small amount, since, after all, I was already on Benadryl. I swear, the only thing that stopped me was the fact that I couldn’t find my epi-pen. And that my 9-year old, N, also known as the Allergy Patrol, physically removed the jar from my hands and kept it with her for the rest of the night. Damn Cookie Butter. Crack Indeed.

In other news…
On Sunday, Colby and I ran a 5K called “Christopher Martin’s Christmas Run for Children.” It is a really popular race, known for its fun atmosphere and fabulous post-race party, and of course, we had a blast.

This was my first time racing the Christopher Martin’s, and I LOVE the first time running any race – no expectations, no comparisons, everything is new and fresh. No time from last year to beat (or meet). No nagging feeling that they “did a better job last year” with check-in, porta-potties, water tables, etc. Just show up, clueless and happy. Perfect.

I had heard how great the Christopher Martin’s event is, though, and it did not disappoint. The atmosphere was so positive and, well, downright jolly. I had barely stepped out of my car when someone complimented me on my Grinch shirt. Everywhere I went in the course area, I saw smiles, heard laughter and even a little caroling. As I approached the registration tent, I passed by a table handing out free Bloody Mary’s (I don’t drink Bloody Mary’s, but I hear that these were great). If that doesn’t set a festive tone for a race, I don’t know what does. Looking around, all I could see was a sea of Santa Suits, elf costumes, jingle bells, antler ears and any other number of holiday inspired accessories that people figured out how to fashion into running wear. It was quite the holiday scene. I was in heaven. I LOVE “The Season.” As previously mentioned in an earlier post- T’Isnt The Season Yet, People! – although I hate when people jump the gun on the The Season, once it is here, I am all over it. Embrace it. Revel in it. Drink it up, literally and figuratively. 2500 runners assembling for a little running and a lot of Holiday Cheer at 9 AM on a Sunday morning? My kind of scene.

And of course, at the far end of the race area, sat the giant truck awaiting the toy donations brought by runners. By the end of the day, the truck was filled with over 2,000 toys ready to go to local children in need. Ho, Ho, Ho, indeed. 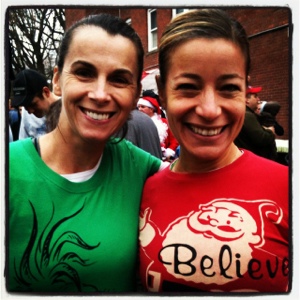 One thought on “Christopher Martin’s Christmas Run for Children”

Join 2,667 other followers
Follow It's A Marathon AND A Sprint on WordPress.com