We are two forty-somethings who have been friends for decades, share a passion for running and yet started running races TOGETHER in 2012. What on earth were we waiting for?!? We thought we had fun spending time together before, but that didn’t hold a candle to the fabulous times have shared since becoming Running BFFs. Tons of laughs, tons of triumphs- The tough moments made all the more bearable because we had each other. Now that’s friendship! While we spend most of our time running, we like to think we’re up for just about anything. Except swimming. Never swimming. Cannonballing definitely. Swimming? Not an option. No Tris here. Ick. We’ve run 5ks, half-marathons, marathons and even qualified and subsequently RAN BOSTON together!  Race of our DREAMS!!!  Cycling up a monster hill, running a hot hideous half-marathon, slogging through a mud puddle, jumping over fire, snowshoeing in sub-zero temps – they all sound pretty good to us.

Adventure? Good times? Self discovery? Bring it. And Bring It Together.

That time we both ran BOSTON! Boston Marathon, 2017! 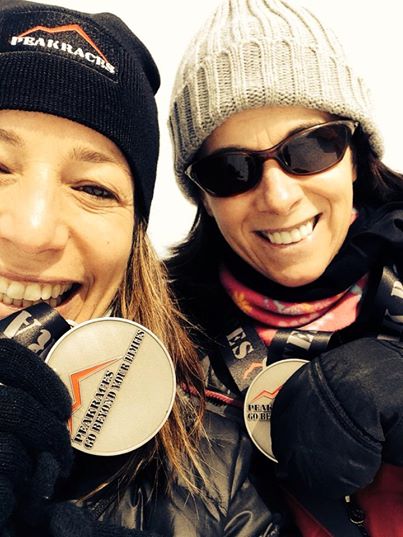 The Happy Finishers! That’s how puffy my eyes get whilst snow shoe running in sub-zero temps. Brrr.

The race where it all began for us! Hilly and fantastic! Some of our best work. 🙂

Follow It's A Marathon AND A Sprint on WordPress.com