One year ago today, our lives were forever changed by a huge, slobbery, brown, frat boy who came BOUNDING into our lives, full tilt boogie. One minute he could be on the cover of Field and Stream, then next he could be the centerfold of Campus Lyfe, complete with a cone on, throwing back Jaeger Bombs and doing keg stands. He has his own Instagram. He’s huge in the New England Cyclocross Scene. He has a sick and expensive sock fetish. He’s our Drunk Otis Brown. 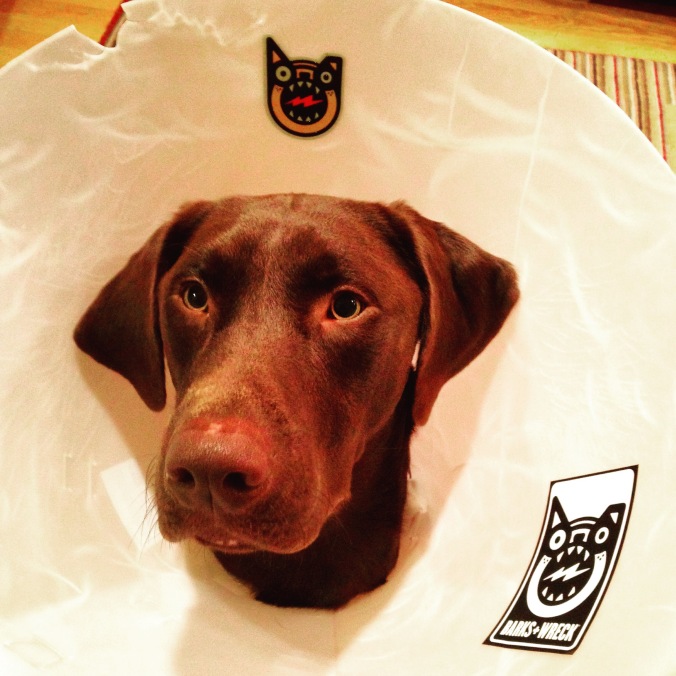 It’s all fun and games until someone winds up in a cone.

And he’s a hot mess. 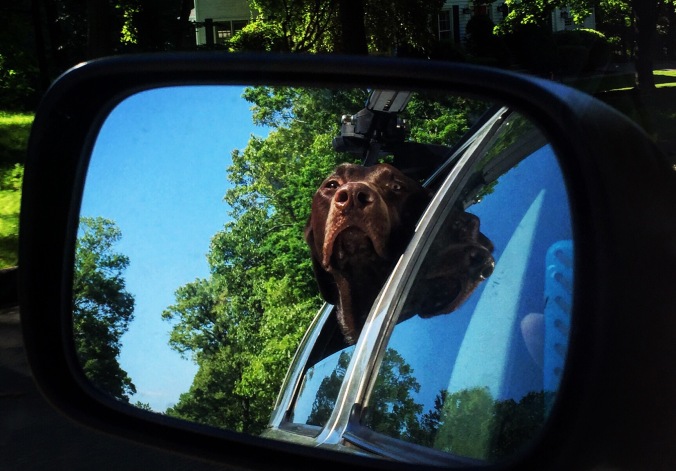 It’s great to be ALIVE! And RESCUED!

For all of his “drunken” antics, that boy loves to RUN. I’ve said it before, he is the Scott Jurek of Dogs on the trail. Focused. Driven. Happiest. He aims to please you in a way that our other pups, Leon James and Pearl “Evil Beagle” Anne just don’t do. Leon James is the sensitive, sweetest boy. He’s a loyal mush ball. My Most Handsome Leon James is what I call him. Sweet Butterbeans. Such a good dog. I adopted him during Colby’s Life Part 1, from a local rescue group. He was a love from the go. Evil Beagle on the other hand, is a different beast. Evil Beagle could frankly give a shit less about loyalty. 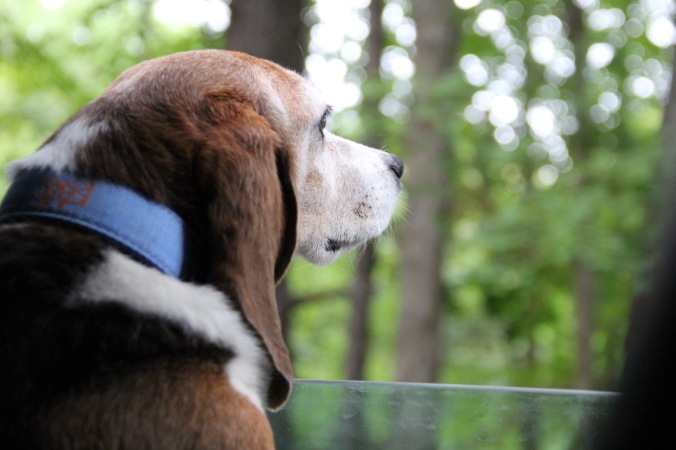 She is a non-stop, tri-colored wag fest. But show her a baby bunny and she’ll have that thing pinned and de-fuzzed in 3 minutes flat. I’m not kidding. She’s gotten two. I give her some slack. She’s a former laboratory research beagle I rescued from a pharmaceutical company. It took her a while to become A Real Dog. Much of it I owe to Leon James.

He was so patient with her. Now? She’s one of the best things that has ever happened to me. She’s a DOG. A real dog. Who fetches. And runs like hell. She’ll lay smack dab in the middle of the yard, sun on her face, tattooed ear flipped, like she’s posing for her Glamour Shot. Drunk Otis adores her. And quite frankly, other than antagonizing the snot out of Evil Beagle, and pissing off his brother Leon James for sport, he’d much rather be with his Humans. I’ve never had a dog like Drunk Otis. He’s just…well…different. He’s a lab. And a chocolate one at that. Which I swear is a totally different thing. I keep asking My Other Half, who always had labs “Uh. Babe. Is he ALWAYS gonna be like this?” He shakes his head yes. Ever so slowly. Every single time.

Rescue a pup. Don’t buy one. There are so many Evil Beagles, Leon James’ and Drunk Otis’ out there. A rescue dog’s capacity to love unconditionally knows no bounds. Sure, they’ll drain your bank accounts, eat your socks and wreck your hard wood floors.  But trust me.  They are worth it. Each and every silly one of them.

Have you ever rescued a dog? Did you grow up with dogs? Do you run with your pup?

It’s raining cats and dogs. Like, pouring out. Sheets of rain. Drunk Otis, who spent the entire weekend either swimming in streams, belly flopping in puddles or lounging in his kiddie pool “helping” me weed, apparently is afraid to go outside to pee in the rain. So instead, he just lifted his leg on the porch. About an inch from his sister, Evil Beagle. Girl was not amused. She responded by biting him on the face. I can’t say I blame her.

Hey, Lady. You gonna clean my pool or what?

In addition to Gardening with Drunk Otis, which ended with me sprinting around the yard swearing at him while a gallon container of delphiniums dangled from his mouth, I got in a nice long bike ride.  Which I really need to do more of, considering I will be riding in my 12th Pan Massachusetts Challenge in a few months. Funny how it sneaks up on me every year. I usually ride with my Other Half, which is on par with riding the Giro D’Italia or any other European Classic. Saturday, I rode alone.

Prior to my Other Half, in what I like to refer to as Colby’s Life Part One, I did all of my training alone. Much like my running. In Colby’s Life Part Deux in 3-D, we ride together. And I love it. There are some days though, I adore a solo ride. I just kicked off fundraising for the PMC, a two day almost 200 mile ride across Massachusetts, aimed at funding life-saving cancer research at the Dana Farber Cancer Institute. Kicking off fundraising means I wrote my annual appeal which means I get very contemplative. I always do when I think about why I ride. Especially when I put words to my feelings. It chokes me up. Cancer always does.

Both Tina and I have written several posts on the Pan Mass Challenge. In fact, they are some of our most read. Take a minute and give them a read.

And you’ll understand when I say that being a part of the PMC Family means the absolute world to me.  We are all riding together, unified by our common goal- our desire to put an end to cancer. There is such amazing, selfless energy that weekend. Such passion. Such emotion. For that one weekend, we are a part of something great.  It’s so very palpable. We are making a difference in the cancer research landscape one pedal stroke at a time. I feel that. I believe that. And I am honored to be a part of it.

Do you have a cause near and dear to your heart? Ride 100 miles or run a marathon? GO!

Hate cancer? Me too. To donate to my ride: Click HERE!

What makes me happy? My Other Half. Negative splits. That Perfect Run. An ice cold beer at the end of a long bike ride. And so much more. There are so very many things that make me happy, it’s hard to pin it down to just FIVE.  But alas, it’s the Friday Five. Not the Friday Five Thousand.  So for the sake of our fabulous hosts, Courtney @ Eat, Pray, Run DC, Mar @ Mar On the Run, and Cynthia @ You Signed Up for What?!? I’ll keep it on track.

What makes you happy? Do you have dogs as RIDICULOUS as ours?